Captain of the Yeomen of the Guard 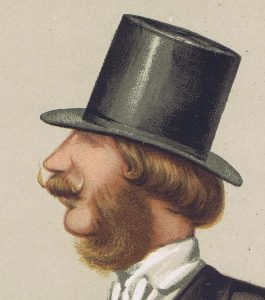 Original Lithograph with the caption at the bottom of the print: A Young Man

George Barrington was returned to Parliament for Eye in 1866. The following year he succeeded his father in the viscountcy but as this was an Irish peerage he did not have to resign his seat in the House of Commons. In 1874 he was sworn of the Privy Council and appointed Vice-Chamberlain of the Household in the Conservative administration of Benjamin Disraeli, a post he held until the government was defeated in the 1880 general election.

The latter year Barrington was created Baron Shute, of Beckett in the County of Berkshire, in the Peerage of the United Kingdom, which entitled him to an automatic seat in the House of Lords. The title was created with special remainder to his younger brother Percy. Barrington later served under Lord Salisbury as Captain of the Yeomen of the Guard from 1885 to January 1886 and as Captain of the Honourable Corps of Gentlemen-at-Arms between August 1886 and his sudden death in November of the same year