Frank Davis attested on 19th October 1891 at Winchester. He was an 18 year old Shoe Rivetter from St Margaret’s, Leicester. His papers show that he had previously been rejected for army service due to being underweight. 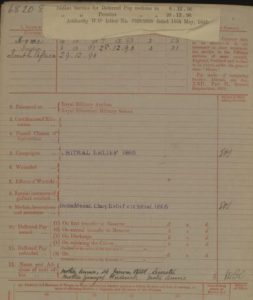 He served in India for over 3 years then in South Africa in 1896.
This medal is confirmed on his papers.
He transferred to the Army Reserve in 1899 whilst in South