Rare combination of a Casualty and Prisoner of War brothers’ medals along with the WW2 Admiralty Slip for George William MOULDER, killed on HMS Phoebe 23rd October 1942. 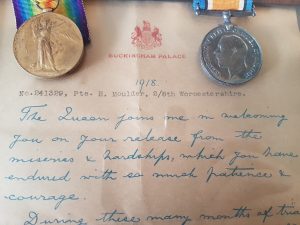 This medal pair to Horace Moulder is accompanied by a framed letter from King George V which welcomes Horace home from hi period of captivity as a Prisoner of War. 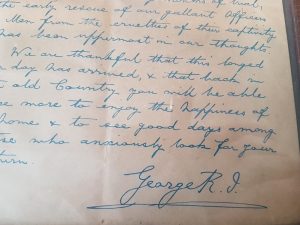 From Buckingham Palace dated 1918 and addressed to

The Queen joins me in welcoming you on your release from the miseries & hardships, which you have endured with so much patience & courage.

During these many months of trial, the early rescue of our gallant Officers and Men from the cruelties of their captivity has been uppermost in our thoughts.

We are thankful that this longed for day has arrived, & that back in the old Country you will be able once more to enjoy the happiness of a home & to see good days among those who anxiously look for your return.

Horace Moulder served as 4121 Private 2 / 8th Battalion, Worcestershire Regiment. The medal roll confirms that he also served with the number 241329.

It is also of note that, on the medal roll, his name appears under that of Francis George Moulder who was killed in action in 1917. 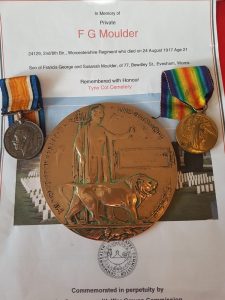 It is also of note that, on the medal roll, his name appears above that of Horace Moulder who was Prisoner of War.

The Commonwealth and War Graves Commission confirms that he was serving in the 2 / 8th Battalion, Worcestershire Regiment when he was killed in action of the 24th August 1917 aged 21 years. He was the son of Francis George and Susannah Mulder of 77 Bewdley Street, Evesham Worcestershire.

Regimental history of the 2/8th records The Battle of Ypres, August 1917, during actions on the Steenbeek. It was here that F G Moulder was killed.

The Plaque has been lovingly and extensively polished over the years, please see images. 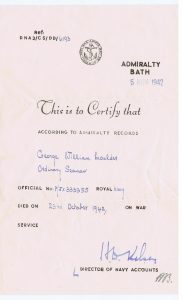 P/JX 333355, Royal Navy. He was on board the H.M.S. Phoebe when it was torpedoed 23rd October 1942. Aged 20 on his death he was the son of Horace and Agnes Moulder and husband of Louisa Irene Moulder of Evesham, Worcestershire. 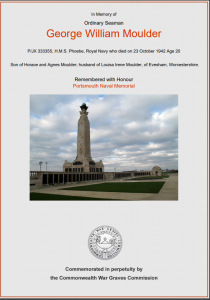 He is Remembered with Honour on the Portsmouth Naval Memorial. With 1939/45 Star, Africa Star and War Medal.