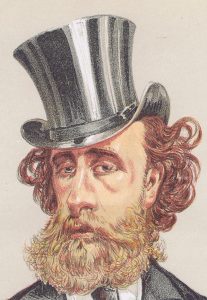 At the Salisbury Petty Sessions in May 1881, Lord Edward Thynne described how he had been accosted by Lord Townshend and two accomplices on the road between Laverstock and Salisbury. A Colonel Nepean held the pony’s head while Townshend struck him several times with the handle of a horse whip. Thynne acknowledged having eloped with Lady Townshend in 1872, but noted that the marquess had never sued for divorce, and alleged that Lord Macduff had attacked him over the same matter while he was abroad.

Townshend was convicted of the assault, and sentenced to a fine of £500 or three months in prison. After some hours in jail, he reluctantly paid the fine, equivalent to £46,300 in 2018. Townshend denounced the court, while Vanity Fair reported unnamed others as saying “the only regret is that he [Thynne] was not thrashed earlier and worse”.

Original Lithograph of The Marquess of Townshend  with the caption at the bottom of the print: The Beggar’s Friend