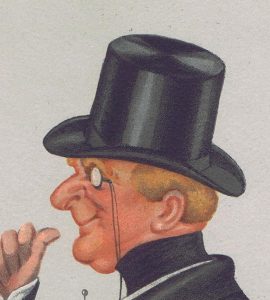 Original Vanity Fair Print Lithograph of The Marquis Of Winchester with the caption at the bottom of the print: The Premier Marquess

Born at Amport House in 1801 as the eldest son of the 13th Marquess of Winchester, he was educated at Eton. On 10 April 1817, he was commissioned a cornet in the 10th Light Dragoons, bought a lieutenancy on 16 November 1820, and a captaincy in the 35th Regiment of Foot Royal Sussex Regiment on 12 June 1823. He exchanged into the 8th Hussars the same year. On 9 June 1826, he bought a majority in the regiment (Lord Brudenell, later Lord Cardigan, got his captaincy), and purchased an unattached lieutenant-colonelcy of infantry on 30 December 1826. On 14 April 1837, he exchanged from unattached half-pay to replace Lord Bingham (later Lord Lucan) as lieutenant-colonel of the 17th Lancers, and then retired from the Army the next day. On 29 June 1842, he was appointed colonel of the North Hampshire Militia after the death of Lord Rodney, much to the chagrin of the regimental lieutenant-colonel, Peter Hawker, who aspired to the post