The Right Reverend John William Colenso Bishop of Natal  Vanity Fair Print . Original Lithograph with the caption at the bottom of the print: The Pentateuch, Published: 28-Nov-1874. Signed by: APE, Carlo Pellegrini . 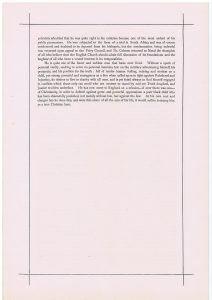 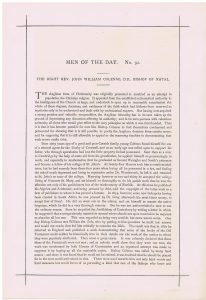 A quite extraordinary man. His early life was extremely interesting, though we have selected a short summary of his latter years.

Colenso devoted the latter years of his life to further labours as a biblical commentator and as an advocate for native Africans in Natal and Zululand who had been unjustly treated by the colonial regime in Natal. In 1874 he took up the cause of Langalibalele and the Hlubi and Ngwe tribes in representations to the Colonial Secretary, Lord Carnarvon. Langalibalele had been falsely accused of rebellion in 1873 and, following a charade of a trial, was found guilty and imprisoned on Robben Island. In taking the side of Langalibalele against the Colonial regime in Natal and Theophilus Shepstone, the Secretary for Native Affairs, Colenso found himself even further estranged from colonial society in Natal.

Colenso’s concern about the misleading information that was being provided to the Colonial Secretary in London by Shepstone and the Governor of Natal prompted him to devote much of the final part of his life to championing the cause of the Zulus against Boer oppression and official encroachments. He was a prominent critic of Sir Bartle Frere’s efforts to depict the Zulu kingdom as a threat to Natal. Following the conclusion of the Anglo-Zulu War he interceded on behalf of Cetshwayo with the British government and succeeded in getting him released from Robben Island and returned to Zululand. Colenso’s campaigns revealed the dark, racist foundation underpinning the colonial regime in Natal and made him more enemies among the colonists than he had ever made among the clergy.

He was known as Sobantu (father of the people) to the native Africans in Natal and had a close relationship with members of the Zulu royal family; one of whom, Mkhungo (a son of Mpande), was taught at his school in Bishopstowe. After his death his wife and daughters continued his work supporting the Zulu cause and the organisation[citation needed] that eventually became the African National Congress.