He coined the phrase “Mother of Parliaments.” 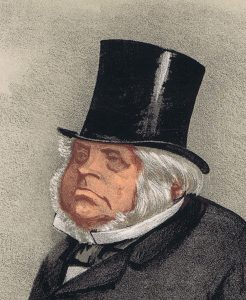 Right Honourable John Bright Vanity Fair Print . Original Lithograph with the caption at the bottom of the print:

“Will the sentimental orator be lost in the practical Minister, or will both be extinguished”

John Bright (16 November 1811 – 27 March 1889) was a British Radical and Liberal statesman, one of the greatest orators of his generation and a promoter of free trade policies. 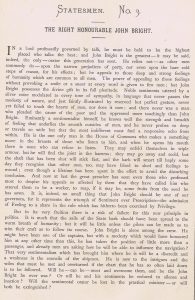 A Quaker, Bright is most famous for battling the Corn Laws. In partnership with Richard Cobden, he founded the Anti-Corn Law League, aimed at abolishing the Corn Laws, which raised food prices and protected landowners’ interests by levying taxes on imported wheat. The Corn Laws were repealed in 1846. Bright also worked with Cobden in another free trade initiative, the Cobden–Chevalier Treaty of 1860, promoting closer interdependence between Britain and France. This campaign was conducted in collaboration with French economist Michel Chevalier, and succeeded despite Parliament’s endemic mistrust of the French.

Bright sat in the House of Commons from 1843 to 1889, promoting free trade, electoral reform and religious freedom. He was almost a lone voice in opposing the Crimean War; he also opposed Gladstone’s proposed Home Rule for Ireland. He was a spokesman for the middle class, and strongly opposed to the privileges of the landed aristocracy. In terms of Ireland, he sought to end the political privileges of Anglicans, disestablished the Church of Ireland, and began land reform that would turn land over to the Catholic peasants. He coined the phrase “Mother of Parliaments.” (wikipedia)