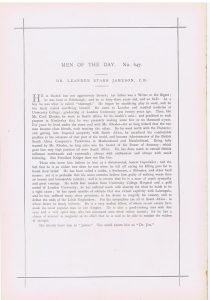 Original Vanity Fair Print Lithograph with the caption at the bottom of the print: Dr. Jim

The Jameson Raid (29 December 1895 – 2 January 1896) was a botched raid against the South African Republic (commonly known as the Transvaal) carried out by British colonial administrator Leander Starr Jameson, under the employment of Cecil Rhodes. It involved 500 British South Africa Company police launched from Rhodesia (region) over the New Year weekend of 1895–96. Paul Kruger, whom Rhodes had a great personal hatred towards, was president of the South African Republic at the time. The raid was intended to trigger an uprising by the primarily British expatriate workers (known as Uitlanders) in the Transvaal but failed to do so. The workers were called the Johannesburg conspirators. They were expected to recruit an army and prepare for an insurrection; however, the raid was ineffective, and no uprising took place. The results included embarrassment of the British government; the replacement of Cecil Rhodes as prime minister of the Cape Colony; and the strengthening of Boer dominance of the Transvaal and its gold mines. The raid was a contributory cause of the Anglo-Boer War (1899–1902) (ackn wikipedia)

Dimensions approximately 23cm x 35cm. Overseas buyers, please do not buy without contacting us to agree shipping costs. Note that these lithograph prints are all in excess of 100 years old. There may be minor imperfections commensurate with age. Please do not hesitate to ask questions about shipping or condition.