Rt. Hon. James Stansfeld Vanity Fair Print . Sir James Stansfeld (5 October 1820 – 17 February 1898), was a British politician. He was appointed the first ever President of the Local Government Board in 1871, an office he held until 1874 and again briefly in 1886.

He was born at Akeds Road, Halifax, the only son of James Stansfeld (1792–1872), originally a member of a firm of solicitors, Stansfeld & Craven, and subsequently county-court judge in the district. His mother was Emma, daughter of John Ralph, minister of the Northgate-End Unitarian chapel, Halifax, and his sister married George Dixon. Brought up as a nonconformist, Stansfeld was in 1837 sent to University College, London, and graduated B.A. in 1840 and LL.B. in 1844. He was admitted a student of the Middle Temple on 31 October 1840, and was called to the bar on 26 January 1849; he does not seem, however, to have practised as a barrister, and later in life derived his income mainly from a brewery at Fulham. On 27 July 1844 Stansfeld married Caroline, second daughter of William Henry Ashurst, a radical and friend of Giuseppe Mazzini, to whom Stansfeld was introduced in 1847: they became close. Stansfeld also sympathised with the Chartist movement, even if Feargus O’Connor denounced him. He also took an active part in propagating radical opinions in the north of England, frequently spoke at meetings of the Northern Reform Union, and was one of the promoters of the association for the repeal of “taxes on knowledge”.

Original Lithograph with the caption at the bottom of the print: 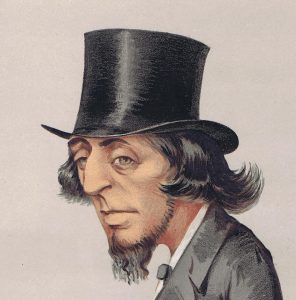 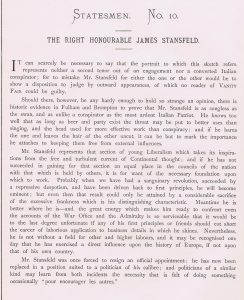