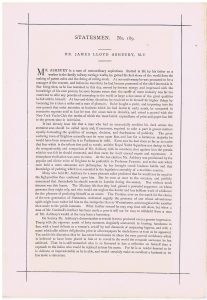 He built the Yacht LIVONIA

James Ashbury Vanity Fair 1874 America’s Cup History.  Mr. James Lloyd Ashbury M P. Vanity Fair Print . Original Lithograph with the caption at the bottom of the print: The Ocean Race, James Ashbury was appointed commodore of the Royal Harwich Yacht Club in 1870. He made the first two, albeit unsuccessful challenges for the America’s Cup, held since 1851 by the New York Yacht Club. Ashbury’s first challenge was in 1870 with his yacht Cambria. The race for the America’s Cup was held on 8 August, and Cambria faced 14 yachts of the New York Yacht Club. The race was won by the Magic, with the Cambria finishing in eighth place. James Ashbury stayed on to take part in the club cruise, and entertained the President of the United States, Ulysses S. Grant on his yacht. Returning to England, Ashbury commissioned a new yacht Livonia. Ashbury took his new yacht across the Atlantic to once again challenge for the America’s Cup, this time on behalf of the Royal Harwich Yacht Club. Controversial from the start, Livonia was defeated 4-1. He returned to the United Kingdom without the trophy accusing the New York Club of engaging in “unfair and unsportsmanlike proceedings”. The club responded by returning a number of trophies he had donated in the previous year. Published: 31-Oct-1874 Signed by: APE, Carlo Pellegrini . Dimensions approximately 26cm x 38cm. Free postage to mainland UK. Overseas buyers please contact us to agree shipping.

He was also Member of Parliament for Brighton, Sussex.