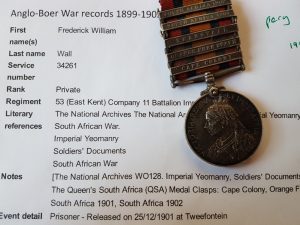 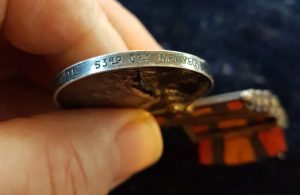 Notably, Frederick Wall was taken prisoner of war in an action at Groenkop, also known as Chritmas Kop. He was released on 25/12/1901 at Tweefontein. Details of the event are on FMP and are as follows. At Groenkop, a farm in the Orange Free State (Harrismith district; Free State, 35 km east of Bethlehem). A force of some 500 men of the Imperial Yeomanry with a gun and maxim all under the command of Maj F.A. Williams, 1st South Staffordshire Regiment, was in camp on the farm protecting the head of a blockhouse line under construction from Harrismith to Bethlehem. The detachment was camped on a hill, Groenkop, with precipitous sides to the west and south and a gentle, well entrenched slope to the east. On the night of 24/25 December 1901, detachments from eight commandos comprising some 500 burghers under the command of Chief-Cmdt C.R. de Wet silently scaled the steep west face in stockinged feet taking the defenses completely by surprise. Led by Cmdt W. Mears and Cmdt G.A. Brand, the burghers completely overran the camp within an hour. De Wet left at dawn with some 240 prisoners as well as two guns, 20 waggons, supplies of ammunition and tents, and 500 horses and mules. British casualties were 57 killed (including Williams) and 88 wounded; the Boers lost 14 killed and 30 wounded; among those killed were Cmdt G.J. Olivier of the Bethlehem commando. This action is known to Afrikaner historians as that of Groenkop or Krismiskop, Groenkop having become known as Christmas Kop. (HM & MGM Jones).

L/5595 F W Wall served in the First World War. He entered France 7th September 1914 and is therefore entitled to a 1914 Mons Star Trio with Clasp and Roses as per his Medal Index Card. He was promoted to Warrant Officer First Class, 1st East Kent Regiment, The Buffs.