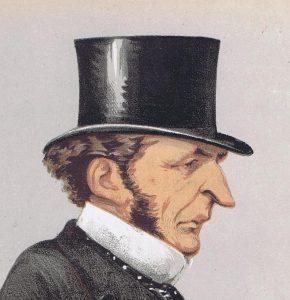 Hugh McCalmont Cairns, 1st Earl Cairns PC, QC (27 December 1819 – 2 April 1885) was an Irish statesman who served as Lord Chancellor of Great Britain during the first two ministries of Benjamin Disraeli. He was one of the most prominent Conservative statesmen in the House of Lords during this period of Victorian politics. He served as the seventeenth Chancellor of the University of Dublin between 1867 and 1885.

Lord Cairns was a great supporter of Barnardo’s and was called upon by Dr. Thomas John Barnardo to open his first girl’s home at Barkingside Ilford Essex on 9 July 1876. Today Cairns house still stands on the one remaining green at Barkingside which was built by the children of England in memory of the First President of Dr Barnardo’s Homes, The Right Honourable Earl Cairns. Cairns House was officially opened 6 August 1887.

Original Lithograph with the caption at the bottom of the print: When Birth Cannot Lead Brains Must