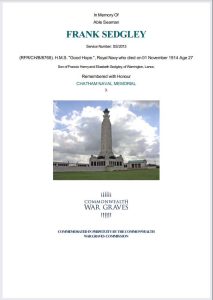 Able Seaman Frank Sedgley was born 6th October 1888 in Warrington, Lancashire. He was a collier when he joined the Royal Navy 1st July 1907, signing up for 5 years. He had transferred to the Royal Fleet Reserve 30th June 1912.

He joined H.M.S. Good Hope in July 1914 and was lost when the Good Hope was sunk in action by SMS Scharnhorst, off the Chilean Coast on the 1st November 1914 when he was aged 27 years.

Sister, Emily, 49 Bostock Street, Warrington, Lancs was next of kin notified. Son of Francis Henry and Elizabeth Sedgley, of Warrington, Lancs. He is Remembered with Honour at Chatham Naval Memorial.