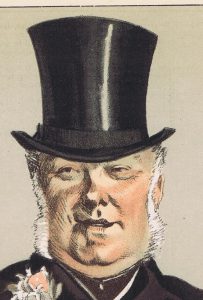 The Monarch of the Glen by Sir Edwin Landseer

Original Lithograph with the caption at the bottom of the print: Silk

He was a significant art collector, mainly of contemporary British painting. The star of his collection, and his posthumous sale at Christie’s in May 1892, was undoubtedly The Monarch of the Glen by Sir Edwin Landseer, one of the most popular paintings of the age. Altogether 31 of the 86 lots were by Landseer, many bought at his studio sale in 1874. Other artists with several works included William Powell Frith, lots 19-21, the Biblical Orientalist Frederick Goodall, lots 22-28, David Roberts, lots 71-73, and the American sculptor Hiram Powers, with three busts as lots 84-86.