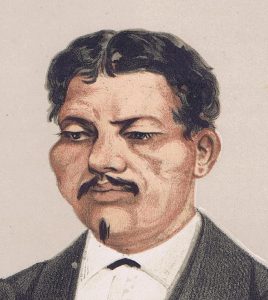 Original Lithograph with the caption at the bottom of the print: He Found Livingstone

Sir Henry Morton Stanley GCB (born John Rowlands; 28 January 1841 – 10 May 1904) was a Welsh journalist and explorer who was famous for his exploration of central Africa and his search for missionary and explorer David Livingstone. Upon finding Livingstone, Stanley reportedly asked, “Dr. Livingstone, I presume?” Stanley is also known for his search for the source of the Nile, his pioneering work later enabling the plundering of the Congo Basin region by King Leopold II of Belgium, and his command of the Emin Pasha Relief Expedition. He was knighted in 1899.

Stanley immigrated to the United States in 1859 at age 18. He disembarked at New Orleans and, according to his own declarations, became friends by accident with Henry Hope Stanley, a wealthy trader. He saw Stanley sitting on a chair outside his store and asked him if he had any job openings. He did so in the British style: “Do you need a boy, sir?” The childless man had indeed been wishing he had a son, and the inquiry led to a job and a close relationship between them. Out of admiration, John took Stanley’s name. Later, he wrote that his adoptive parent died two years after their meeting, but in fact the elder Stanley did not die until 1878. This and other discrepancies led John Bierman to argue that no adoption took place. Tim Jeal goes further, and, in Chapter Two of his biography, subjects Stanley’s account in his posthumously published Autobiography to detailed analysis. Because Stanley got so many basic facts wrong about his ‘adoptive’ family, Jeal concludes that it is very unlikely that he ever met rich Henry Hope Stanley, and that an ordinary grocer, James Speake, was Rowlands’ true benefactor until his (Speake’s) sudden death in October 1859.

Stanley reluctantly joined  in the American Civil War, first enrolling in the Confederate States Army’s 6th Arkansas Infantry Regiment and fighting in the Battle of Shiloh in 1862. After being taken prisoner at Shiloh, he was recruited at Camp Douglas, Illinois, by its commander Colonel James A. Mulligan as a “Galvanized Yankee.” He joined the Union Army on 4 June 1862 but was discharged 18 days later because of severe illness. After recovering, he served on several merchant ships before joining the US Navy in July 1864. He became a record keeper on board the USS Minnesota, which led him into freelance journalism. Stanley and a junior colleague jumped ship on 10 February 1865 in Portsmouth, New Hampshire, in search of greater adventures. Stanley was possibly the only man to serve in the Confederate Army, the Union Army, and the Union Navy (wikipedia)