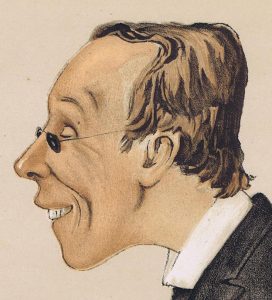 Original Lithograph with the caption at the bottom of the print: A Radical Leader

Henry Fawcett was born in Salisbury, and educated at King’s College School and the University of Cambridge: entering Peterhouse in 1852, he migrated to Trinity Hall the following year, and became a fellow there in 1856, the year he graduated BA as 7th Wrangler. In 1858, when he was 25, he was blinded in a shooting accident. Despite his blindness, he continued with his studies, especially in economics. He was able to enter Lincoln’s Inn, but decided against a career as a barrister and took his name off their books in 1860.

Through his campaigning for women’s suffrage, Henry Fawcett met Elizabeth Garrett Anderson, to whom he proposed in 1865. She rejected the proposal to concentrate on becoming a doctor at a time when women doctors were extremely rare. However, in 1867 Fawcett married Elizabeth’s younger sister Millicent Garrett. They had one child, Philippa Fawcett. Henry Fawcett’s career was cut short by his premature death from pleurisy in November 1884, aged 51. He is buried in Trumpington Extension Cemetery, Cambridge where several members of the family of Charles Darwin are also buried, including Sir George Darwin, Lady Maud, and Gwen Raverat.