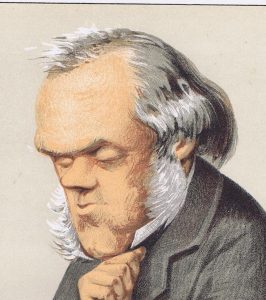 Henry Bruce was born at Duffryn, Aberdare, Glamorganshire, the son of John Bruce, a Glamorganshire landowner, and his first wife Sarah, daughter of Reverend Hugh Williams Austin. John Bruce’s original family name was Knight, but on coming of age in 1805 he assumed the name of Bruce: his mother, through whom he inherited the Duffryn estate, was the daughter of William Bruce, high sheriff of Glamorganshire. Henry was educated from the age of twelve at the Bishop Gore School, Swansea (Swansea Grammar School). In 1837 he was called to the bar from Lincoln’s Inn. Shortly after he had begun to practice, the discovery of coal beneath the Duffryn and other Aberdare Valley estates brought his family great wealth. From 1847 to 1854 Bruce was stipendiary magistrate for Merthyr Tydfil and Aberdare, resigning the position in the latter year, after entering parliament as Liberal member for Merthyr Tydfil.