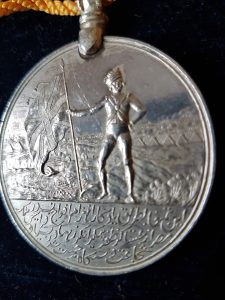 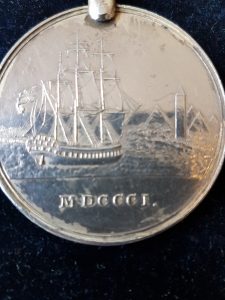 Silver, later striking, obverse illustrating a standing Sepoy, holding a large ensign, an attack upon a fortified position in the distance, inscribed below in Persian “This medal has been presented in commemoration of the defeat of the French armies in the Kingdom of Egypt by the great bravery and ability of the victorious army in England“, reverse is a starboard quarter view of a full rigged ship under sail approaching land, four pyramids and an obelisk in the distance at the right, Roman numeral dated “MDCCCI” (1801) below, very crisp detail, 51.7 mm. The medal was issued by the Honourable East India Company to British and Indian troops from India who formed a Division under Major General Baird. 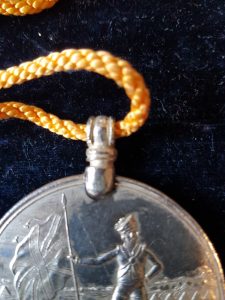