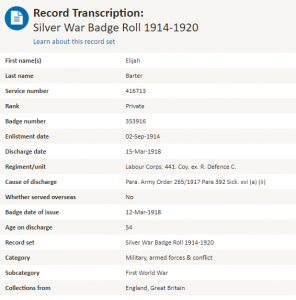 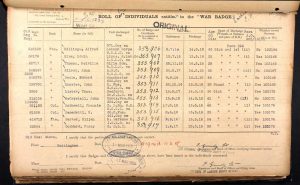 Elijah Barter was born in Shaftesbury, Dorset in 1862. He joined the Hampshire Regiment 1881. His discharge papers reveal that he was discharged from his first period of service 12th December 1893.

His medal is confirmed on the Roll.

He was awarded a Great War Silver War Badge, No. 353936, on discharge, aged 54 years, from 441 Coy. ex Royal Defence Corps. It was issued 12th March 1918. The Roll confirms that he served practically the entire Great War having enlisted 2nd September 1914 to his discharge.