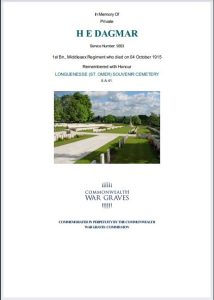 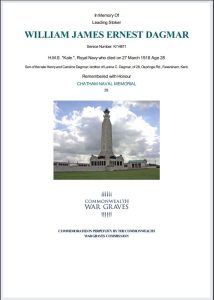 The Great War medal groups of 2 brothers born and living in Great Yarmouth, Norfolk, who were both killed in the First World War.

Sons of the late Henry and Caroline Dagmar; brother of Lavina C. Dagmar, of 28, Ospringe Rd., Faversham, Kent. Harry and William are listed on the 1901 Census living at 88 George Street, Great Yarmouth. Their ages are given as 13 and 11 respectively. Living with them, at the time of the 1901 Census, in Great Yarmouth was their sister Lavinia Dagmar.

On 27 March 1918 Kale was lost after striking a contact mine in the North Sea with the loss of 41 officers and men. It seems she hit a British mine. David Hepper in British Warship Losses records: “The court martial enquiry was very critical of Commander Dennison [in command]. He had steered a course which was six miles east of the swept channel [i.e. swept for mines] and straight into a prohibited area which contained a defensive British minefield; details of the restricted zone had been promulgated several weeks earlier, but he had failed to read them or to see that the information provided was marked on the charts.” (ackn Wikipedia)

PAYPAL is also available but will attract a surcharge of 4.5% – please add on checkout.