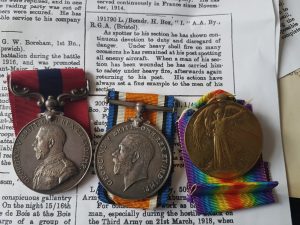 191790 Lance Bombardier H Box “L” A.A.By., R.G.A. (Bristol).
As spotter to his section he has shown continuous devotion to duty and disregard of danger. Under heavy shell fire on many occasions he has remained at his post spotting all enemy aircraft. When a man of his section has been wounded he has carried him to safety under heavy fire, afterwards again returning to his post. His actions always set a fine example to the men of his section.

He was originally Gazetted 1st January 1919. This confirms that the award was for action in France.

The group consists of: 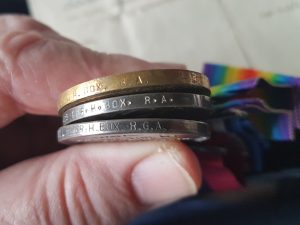 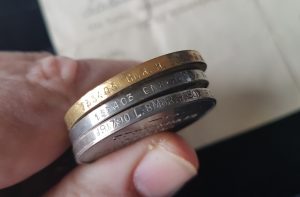 His medal index card confirms that this is his full entitlement and that the numbers given are correct.
He was Lance Bombardier at “L” Anti-Aircraft Battery.

We also have his letter, and envelope which is in a very poor state, from the Royal Garrison Artillery Record Office. Dated 23rd April 1919. The letter is addressed to:
Mr H Box D.C.M.
98 Kingsland Road
St Philips
Bristol