The medal roll for 1st Battalion, Gloucester Regiment, confirms the medal and the 3 clasps. 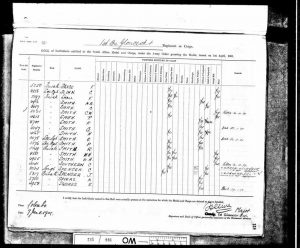 His Medal Index Card confirms his entitlement to the Great War Medals. 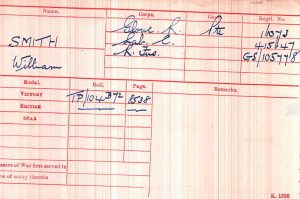 A pass through hills in Natal Colony (Klip River district; KwaZulu-Natal) ten kilometres north of Ladysmith, Nicholsonsnek. This was the objective of a column commanded by Lt-Col F.R.C. Carleton, The Royal Irish Fusiliers, three kilometres north of the hill Cayinguba (Caimguba) where it was forced to surrender to Cmdt L.P. Steenkamp on 30 October 1899 in the action usually referred to as that of Nicholson’s Nek.

This super group is accompanied by a photograph of Private Smith. 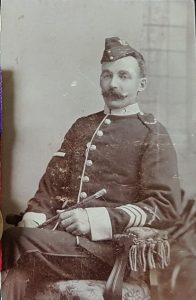 Account of the Battle of Nicholson’s Nek (ref. historyofwar)

The Battle of Nicholson’s Nek was one of two British defeats around Ladysmith that came to be known as “Mournful Monday”, or the battle of Ladysmith.

After a brief attempt to defend a line closer to the Transvaal, at Dundee, Lieutenant-general Sir George White, the British commander in Natal, had withdrawn to Ladysmith. The British army in Natal had concentrated in Ladysmith by the early morning of 25 October.

Several Boer columns were converging on the town, but by 29 October were not all in place. White decided to launch a pre-emptive strike on those forces that were already in place to the north east and east of the town. He also dispatched a force to Nicholson’s Nek, north of Ladysmith, either to prevent another Boer column from interfering in the main fight around Ladysmith, or to block one possible route a defeated Boer army might take from Ladysmith.

The British force consisted of six companies from the Royal Irish Fusiliers (520 men), five and a half from the Gloucestershire Regiment (450 men) and No. 10 Mountain Battery (140 men), all commanded by Lieutenant Colonel Frank Carleton. Their supplies were carried on the backs of well over one hundred mules, being led by the soldiers. It would be the mules that would wreck the expedition.

Carleton’s force did not get moving until late on 29 October. By two in the morning on 30 October, Carleton decided that it was too late to continue on to Nicholson’s Nek, and decided to camp on Tchrengula Hill, a steep hill to the side of the trail. During the attempt to climb Tchrengula Hill, the mules stampeded, taking with them all of the water, the heliographs, most of the ammunition and enough parts of the artillery to make all of it useless.

The British force was now in a very vulnerable position, and really should have retreated back to Ladysmith. Instead, Carleton decided to remain on Tchrengula Hill. Over the next two hours he managed to get most of his men onto the top of the hill. However, the British chose to camp on the southern, slightly lower, end of the hill, leaving the higher northern end unguarded. The British line was poorly laid out, making it hard for the two wings to communicate, but the soldiers worked to create a reasonably strong line of stone ‘sangers’ or breastworks.

Meanwhile, the Boers had been alerted to the British presence by the noise of the mules. Around 500 men took up place at the north end of Tchrengula Hill, and at dawn opened fire on the British position. This was the empty battlefield that the British were so bad at dealing with at this stage. The Boer riflemen were scattered amongst the rocks on the top of the hill, almost invisible, and refusing to present a target for disciplined British musketry. Boer casualties were reported as four dead and five wounded, while the British suffered 38 dead and 105 wounded. Other Boer forces were already on neighbouring hilltops, from where they were able to fire into the sides of the British force.

The battle ended in chaos. One part of the British line misinterpreted an attempt to warn them of a flanking attack as an order to pull back, and abandoned the line of sangers, which the Boers quickly seized. The Gloucestershire Regiment had taken the brunt of the fighting so far. Just after noon, Captain Stuart Duncan, apparently convinced that his isolated detachment was alone on the hill, raised the white flag. Where this differed from the Boer action at Elandslaagte was that when Carleton saw the Boer’s rise to accept the surrender, he decided that he had no choice but to accept the white flag and surrender the rest of this force. The Royal Irish Fusiliers, who had yet to be heavily engaged, were enraged by this decision, but had to accept it. In contrast, when part of his force had raised the white flag at Elandslaagte, General Kock had responded by leading a counterattack in person. The two sides still had a very different conception of the use of the white flag.

Carleton’s decision to surrender was almost certainly correct. From his position on Tchrengula Hill he could see back to Ladysmith, where White’s main attack had also failed. His own ammunition was running short. Retreat would have been impossible. However, the result was the biggest surrender of British troops since the Napoleonic Wars. Close to one thousand British soldiers entered captivity after the battle. The defeat at Nicholson’s Nek and the failure of White’s main attack at Lombard’s Kop ended any chance of avoiding a siege.