Direct from the family. 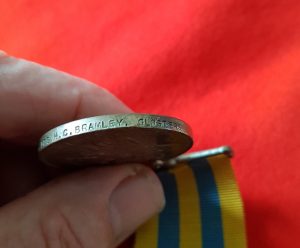 This 1st Battalion, The Gloucestershire Regiment, Korea Medal, UN Korea Medal, US Presidential Citation  group with original photographs and papers are brought, fresh to the market from the family of the recipient. This wonderful lot has been with the last member of the family in excess of 40 years. Private H. C. Bramley is a confirmed Prisoner of War as listed in book The Imjin Roll by Colonel E D Harding DSO.

Private Charles (Henry Charles) Bramley served from November 1944 with various units (Hampshires, Dorsets, Devon) before joining the Glosters 5th September 1950. The details of which can be seen in his Certificate of Service book. 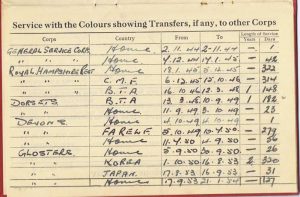 Whilst with the Devons he served with FARELF (Far Eastern Land Forces) in Malaya for which he is entitled to the General Service Medal, Malaya clasp. Having transferred to the Glosters, his period in Korea is recorded from 1st October 1950 to 16th August 1953 with a brief period (1 month) in Japan prior to relocation to the UK.

A list of the items in this lot is as follows: 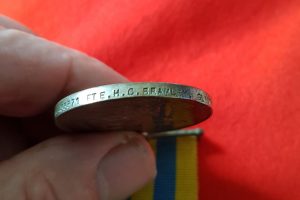 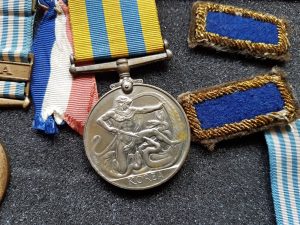 Along with – Regular Army Certificate of Service booklet, Soldier’s Paybook, photograph (Bramley identified) with MALAYA 1950 written on the reverse, photograph (Bramley identified with biro mark on his arm – seated second from left) with the note written on the reverse All my love Charlie. H.M.T. WINDRUSH.  19-10-50  1st GLOSTER REGT. 9 Pln C Coy Going out to Korea TROOP SHIP”, 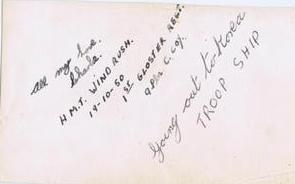 And a typed record of The Battle of The Imjin River – The Story of The 1st Battalion, 22nd to 25th April 1951 (the account of the gallant action at Choksong and Hill 235 from a letter from Lt Col Digby Grist, a fuller account by Major N S Watkin-Williams both dated 29th April and various newspaper reports.).

The final page is titled HIGHEST U.S. MILITARY HONOUR FOR 1ST BATTALION. It is a description of the United States President’s Distinguished Unit Citation and the ceremonial parade.

He served throughout the Gloster’s Korean War in C Company, as per the annotated photograph, with whom he sailed to Korea. The campaign and the incarceration of the Prisoners of War are thoroughly well documented.

He  is confirmed as having been taken prisoner of war during the Glosters epic stand at the Battle of Imjin River between 22nd to 25th April 1951. Images may not be reproduced without express permission.

Glorious Glosters Imjin River POW Medal Group. The GSM Malaya clasp is not with this superb group and is believed to have been given to a separate family member 40 years ago. 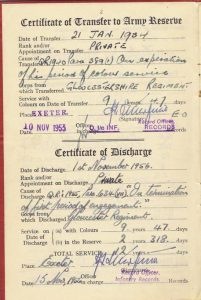 As part of the United Nations Forces the 1st Battalion was despatched to Korea in 1950 when the Communist North Koreans invaded South Korea without warning. Later a Chinese Communist Army came to the assistance of the North Koreans.

ln April 1951 the British 29th Infantry Brigade was holding a wide defensive position behind the lmjin River. The Glosters occupied a vital part of this front, astride the main track to Seoul, the capital city of South Korea, which was the traditional invasion route from the north.

For days a Chinese attack had been expected and on the evening of the 22nd April small parties of the enemy were observed approaching and then crossing the wide river bed. A patrol of A Company at “Gloucester Crossing” did great execution to these parties but soon the trickle of Chinese became a flood, and by 11.30 pm the patrol had used up all its ammunition and was recalled.

By 3 o’clock on the morning of the 23rd, St George’s Day, A Company’s position on a commanding feature named Castle Hill was under extremely heavy attack, as was D Company on their right, and an hour later B on the right of D was equally engaged. After six hours fighting, much of it hand to hand, A Company was driven back from Castle Hill, and a desperate but unsuccessful counter-attack was launched to retake it, during which Lieutenant Curtis lost his life but gained a posthumous VC. D Company’s position was now untenable, so it was later withdrawn after further fighting, together with the remnants of A. 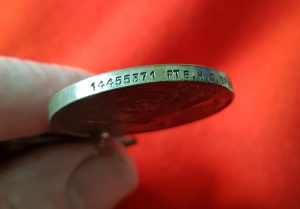 Later B Company was pulled back, and the whole Battalion now took up position on the hills around the village of Solma-Ri.

The Chinese did not closely follow up this withdrawal, but meanwhile very large numbers of them had crossed the river and infiltrated past the Glosters. Their attacks on other parts of the front had been equally severe, and now the other United Nations units on their flanks had been forced back so that by mid-day the Glosters were completely separated from the rest of the Division, and indeed almost surrounded.

That night B and C companies were heavily attacked, the former being reduced to one officer and 20 other ranks, and early 0n the following morning Colonel Carne decided to concentrate the remnants of his battalion on the top of a steep and rugged feature known as Hill 235 on the map, but now as Gloster Hill. On the 24th no major attack developed against the battalion, but two relieving columns of armour and infantry, sent forward by Division, failed to fight their way through. The Glosters were now completely cut off, but although short of ammunition and water they were in good heart and determined to hold out for as long as possible. 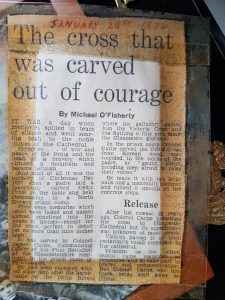 ln the very early hours of the 25th the Chinese launched an all-out attack on the hill wave after wave of shooting, screaming men surged forward, regardless of the defenders fire. Chinese trumpets directed them and encouraged them. ln order to confuse them it was decided that one of the British bugles should be blown. The adjutant then ordered Drum Major Buss to sound his bugle and on being asked what calls, replied everything except Retreat. Of all the calls the Long Reveille was the one which made the deepest impression. The battle continued with every weapon involved, and then at 9 o’clock a highly successful air strike was delivered by the US Air Force which for the time being halted the Chinese decisively.

Glosters Prisoners of War – Bramley is identified on this photograph 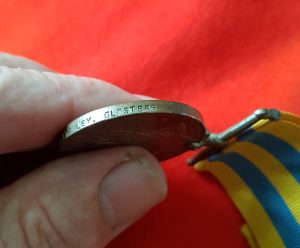 lt was during this pause that the Colonel received instructions over the wireless to fight his way out, his job done, and Brigadier Brodie wrote in the Operations log book at Brigade HQ “Nobody but the Glosters could have done this.”

The battalion split up into groups which tried to work their way back independently, but the United Nations forces were now consolidating after their withdrawal fully seven miles to the rear, and only one party succeeded in reaching them, the rest being killed or captured. Out of 750 men of the battalion only 150, including the rear echelon, remained on which to rebuild the unit.

Lieutenant Colonel Carne, who survived his harsh imprisonment, later received the VC, and the battalion was awarded the US Presidential Unit Citation to commemorate its magnificent stand. Her Majesty the Queen graciously granted permission for the emblem of the Citation to be worn by all members of the Regiment. (acknowledgement to the excellent and well worth visiting Soldiers of Gloucestershire – Museum article)

Please do nor hesitate to ask any questions.

We are pleased to add the genuine Gloucestershire Regiment badges to enhance the presentation of this excellent lot. 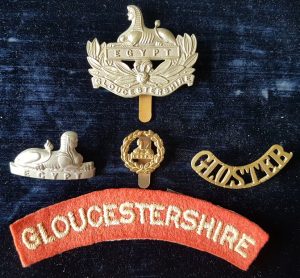