Wisden Cricketer of the Year for 1898

Played Rugby for Gloucester and Served in the Lincolnshire Regiment in the Great War.

(19 May 1874 – 11 May 1955) was an English cricket player, often reckoned to have been the fastest run-scorer cricket has ever known. He was Wisden Cricketer of the Year for 1898. He served in the Lincolnshire Regiment in the Great War and played rugby for Gloucester. 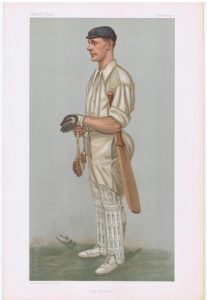 Jessop was born in Cheltenham, Gloucestershire. Nicknamed “The Croucher” because of his unusual hunched stance at the crease and though a stocky build at 5’7″ and 11 stone, he remained a fast bowler through his career. He was also a powerful driver, cutter and hooker. The Fifth Test at The Oval in August 1902, known as “Jessop’s match”, highlighted Jessop’s ability to play quickly. England had an unlikely one-wicket victory against a quality Australian side who set England 263 to win in the fourth innings. Jessop came to the crease with England at 48 for 5. He scored his first 50 runs in 43 minutes and reached his century in 75 minutes. He was eventually dismissed after 77 minutes for 104, which included 17 fours and an all-run five. Many of the fours had well cleared the boundary, but the laws of cricket in 1902 meant that to obtain six runs the ball had to be hit out of the ground. One of these “fours” was caught on the players’ balcony. A newspaper managed to keep a detailed record of his innings, which shows that Jessop reached his hundred off 76 balls – one of the fastest Test centuries of all time.

A genuine all-rounder, in his early days he was a bowler of considerable pace. He could maintain great stamina; however, he suffered a back strain in his debut Test from being over-bowled which plagued his career. (Frith, 2007) Jessop was also a quick fielder, giving Gloucestershire a reputation for strength in the field. His fielding was a matter of great pride to him. In his early days he fielded at cover-point; later he specialised in the position of extra mid-off.

He first played for Gloucestershire in 1894, and a short innings of 30 against the deadly bowling of Mold and Briggs was seen as indicating a promising player. In 1897 when Jessop did the “double” of 1000 runs and 100 wickets, Wisden made him a Cricketer of the Year in 1898, while two years later his two innings against Yorkshire at Bradford both featured scored a century before lunch, making 104 in the first innings in forty minutes and 139 in the second, again reaching his hundred in under an hour.

After two moderate years – despite a Test debut in 1899 – Jessop in 1900 took over as captain and secretary of Gloucestershire and had his finest year, scoring 2210 runs and taking 104 wickets including a career-best 8 for 29 against Essex. The following year, whilst he lost his pace and his bowling declined to fewer than thirty wickets,[4] his batting improved further, whilst 1902 was highlighted by his Fifth Test efforts at the Oval.

In 1903, Jessop played the highest innings of his career – 286 in 180 minutes against Sussex – and for the rest of the decade, as well as being captain of Gloucestershire, he was their batting mainstay, though after 1901 he could rarely bowl at a quick pace. Despite a major injury in 1909 keeping him off the field for over two months, Jessop continued to be a major force as a batsman until he relinquished the secretaryship of Gloucestershire in 1912. In his last two seasons he was not always available and showed only modest form, and, at the age of 45, did not play again when cricket resumed after World War I.

In the extraordinary match between Gloucestershire and Northants on 10–12 June 1907, Northants in their first innings were all out for 12, the record lowest Championship score; Jessop, bowling unchanged with Dennett, achieved an analysis of 2 wickets for 3 runs, regarded by many as the fewest runs conceded by a bowler bowling all through an innings.

Besides his cricketing ability, Jessop was an allround athlete of note. He got his Blue as a hockey goalkeeper, but fell ill and could not play in the University match. He came near getting an Association football Blue and played for The Casuals as half-back or goalkeeper. He also appeared as a wing-threequarter for Gloucester R.F.C. He would have played billiards for Cambridge against Oxford, but was gated and could not take part. In one week he made two breaks of over 150. He could run the 100 yards in 10.2 seconds and frequently entered for sports meetings. A scratch golfer, he took part in the Amateur Championship in 1914, was Secretary of the Cricketers’ Golfing Society and for some years Secretary of the Edgware Club (cricinfo.com).

In 1916 whilst serving in the Lincolnshire Regiment, suffering from severe lumbago Jessop was sent to a clinic in Bath The Radiant Heat Treatment ‘ involved dousing with total immersion for 30 minutes at a temperature of 210-310 degrees F’. The patient was placed in an up-ended coffin like structure and steamed up. If he became too uncomfortable he could raise the lid and get out. By some ‘accident’ the catch fell, the attendant had gone away and Jessop was unable to summon assistance. When he was eventually rescued his heart had been seriously damaged by this terrible ordeal. In a matter of minutes the sporting life of one of the greatest athletes had come to an abrupt end. For the next 39 years Jessop was to lead a life of very limited activity. In November 1917 he was invalided out of the Army. He was able to make his living from journalism and compiled his biography: The Cricketer’s Log. In 1924 he took up an appointment as Secretary of Edgware Golf Club, a position he held until 1936 when the land was sold for housing development. In 1936 Jessop moved to the Vicarage of Fordington St George, Dorchester, Dorset, to live with his son. It was at Fordington, Dorset, that he died on 11 May 1955, aged 80. (wikipedia)