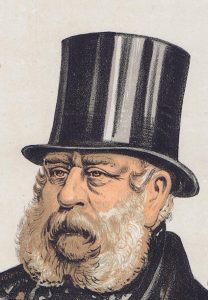 Prince George, Duke of Cambridge, (George William Frederick Charles; 26 March 1819 – 17 March 1904) was a member of the British Royal Family, a male-line grandson of King George III, cousin of Queen Victoria, and maternal uncle of Queen Mary, consort of King George V. The Duke was an army officer by profession and served as Commander-in-Chief of the Forces (military head of the British Army) from 1856 to 1895. He became Duke of Cambridge in 1850 and field marshal in 1862. Deeply devoted to the old Army, he worked with the Queen to defeat or minimize every reform proposal, such as setting up a general staff. His Army became a moribund and stagnant institution, lagging far behind France and Germany. Its weaknesses were dramatically revealed by the poor organization at the start of the Second Boer War.

Original Lithograph with the caption at the bottom of the print: A Military Difficulty