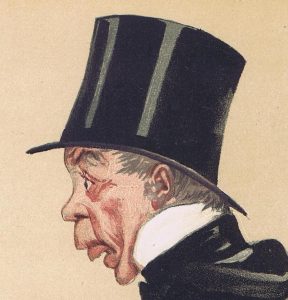 Original Lithograph with the caption at the bottom of the print: A Yorkshire Solicitor

George Leeman (August 1809 – 25 February 1882) was a lawyer, railwayman and a Liberal Member of Parliament (MP) for the City of York in the nineteenth century

In 1849 he became chairman of the York, Newcastle and Berwick Railway, succeeding his rival the ‘Railway King’ George Hudson after Leeman’s investigations helped uncover Hudson’s illegal share dealing. Leeman was deputy chairman of the successor company, North Eastern Railways, from 1855 to 1874 and chairman from 1874 to 1880, having encouraged its formation through mergers in 1854, and he was a chairman of the Railway Association of Great Britain. Leeman resigned as chairman of the NER in 1880 after the failure of his mining company reduced his wealth and harmed his health. He remained a member of the board until his death two years later.