Captain of St Andrews Golf Club,  Captain in the Coldstream Guards, Grand Master of the Freemasons of Scotland 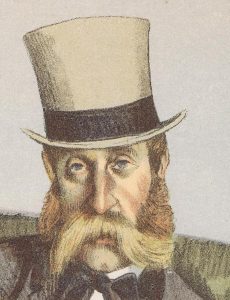 The Novelist of Society

Original Lithograph with the caption at the bottom of the print: The Novelist of Society

Major George John Whyte-Melville was born in 1821, at Mount Melville near St Andrews. He was a son of Major John Whyte-Melville and Lady Catherine Anne Sarah Osborne and a grandson on his mother’s side of the 5th Duke of Leeds. His father was a well-known sportsman and Captain of St Andrews Golf Club. He was also Grand Master of the Freemasons of Scotland from 1834 to 1866. George was tutored privately at home by the young Robert Lee then educated at Eton, entered the army in 1839, became captain in the Coldstream Guards in 1846 and retired in 1849. He married The Hon Charlotte Hanbury-Bateman in 1847, and they had one daughter, Florence Elizabeth, who went on to marry Clotworthy John Skeffington, 11th Viscount Massereene and 4th Viscount Ferrard. In 1849 Whyte-Melville was the subject of a summons for maintenance by Elizabeth Gibbs, “a smartly-dressed and interesting looking young woman”, who alleged that he was the father of her child. She alleged that she had known Whyte-Melville since December 1846 and that she had given birth to his child in September 1847. The Judge found for the defendant as the written evidence could not be proven to be in Whyte-Melville’s hand but allowed the complainant to apply for a further summons in order to obtain proof.

It has been claimed that Whyte-Melville’s death inspired the well-known hunting song “John Peel” – although John Peel was a real-life huntsman in the Lake District, the author of the lyrics, John Woodcock Graves, was a close friend of Whyte-Melville. After imbibing a quantity of alcohol at Whyte-Melville’s funeral, Graves penned some verses in tribute to Whyte-Melville, set to the melody of a traditional folk song entitled, “Bonnie Annie”