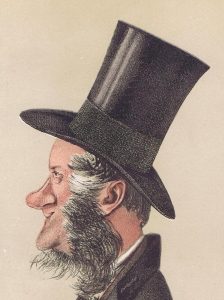 Original Lithograph with the caption at the bottom of the print: Answers Questions

George Henry Charles Byng, 3rd Earl of Strafford, Viscount Enfield. In 1852 Byng entered Parliament as Member of Parliament for Tavistock, a seat he held until 1857, when he became MP for Middlesex. He served under Lord Russell as Parliamentary Secretary to the Poor Law Board between 1865 and 1866 and under William Ewart Gladstone as Under-Secretary of State for Foreign Affairs between 1871 and 1874. In 1874, Lord Enfield left the House of Commons when he was defeated at the general election, but was then called up to the House of Lords in his father’s barony of Strafford. He again held office under Gladstone as a Lord-in-waiting in 1880 and as Under-Secretary of State for India between 1880 and 1883. Lord Strafford was also First Civil Service Commissioner from 1880 to 1888 and Lord Lieutenant of Middlesex from 1884 to 1888. Throughout his political career, he served with the Middlesex Militia. He was the first President of Middlesex County Cricket Club serving twice between 1866 and 1876 and 1877 and 1898. In 1886, he succeeded his father in the earldom of Strafford.