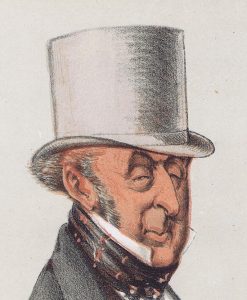 President of the Geological Society

The crater Murchison on the Moon and at least fifteen geographical locations on Earth are named after him.

Murchison was born at Tarradale House, Muir of Ord, Ross-shire, the son of Kenneth Murchison. His wealthy father died in 1796, when Roderick was four years old, and he was sent to Durham School three years later,[3] and then the Royal Military College, Great Marlow to be trained for the army. In 1808 he landed with Wellesley in Galicia, and was present at the actions of Roliça and Vimeiro. Subsequently under Sir John Moore, he took part in the retreat to Corunna and the final battle there.

After eight years of service Murchison left the army, and married Charlotte Hugonin (1788–1869), the only daughter of General Hugonin, of Nursted House, Hampshire. Murchison and his wife spent two years in mainland Europe, particularly in Italy. They then settled in Barnard Castle, County Durham, England in 1818 where Murchison made the acquaintance of Sir Humphry Davy. Davy urged Murchison to turn his energy to science, after hearing that he wasted his time riding to hounds and shooting. Murchison became fascinated by the young science of geology and joined the Geological Society of London, soon becoming one of its most active members. His colleagues there included Adam Sedgwick, William Conybeare, William Buckland, William Fitton, Charles Lyell and Charles Darwin.

Exploring with his wife, Murchison studied the geology of the south of England, devoting special attention to the rocks of the north-west of Sussex and the adjoining parts of Hampshire and Surrey, on which, aided by Fitton, he wrote his first scientific paper, read to the Geological Society of London in 1825. Turning his attention to Continental geology, he and Lyell explored the volcanic region of Auvergne, parts of southern France, northern Italy, Tyrol and Switzerland. A little later, with Sedgwick as his companion, Murchison attacked the difficult problem of the geological structure of the Alps. Their joint paper giving the results of their study is a classic in the literature of Alpine geology.

Original Lithograph of Sir Roderick Murchison with the caption at the bottom of the print: A Faithful Friend, an eminent Savant, and the best possible of Presidents