Lieutenant-Governor of New Brunswick in 1867 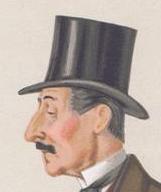 Original Vanity Fair Print Lithograph of General Sir Charles Hastings Doyle K.C.M.G. with the caption at the bottom of the print: A General

Ensign in the 24th Regiment of Foot, The 2nd Warwickshire Regiment. After service in the Crimean War, he was stationed in Nova Scotia and, during the American Civil War, resolved the Chesapeake Affair, which took place in Halifax. Next Charles Hastings Doyle countered the threat of Fenian Raid on Canada’s Maritime Provinces by ending the Campobello Island Raid (1866). By April 1866 the menace of a Fenian invasion of New Brunswick was at its most serious, and Doyle quickly responded to Lieutenant Governor Gordon’s request for military aid. On 17 April 1866 he left Halifax with Royal Navy warships carrying over 700 British regulars and proceeded to Passamaquoddy Bay, where the Fenian force was concentrated, under the command of John O’Mahony. This show of British armed might discouraged the Fenians, and the invaders dispersed.

Overseas buyers please contact us to agree shipping. Note that these lithograph prints are all in excess of 100 years old. There may be minor imperfections commensurate with age. Please do not hesitate to ask questions about shipping or condition.