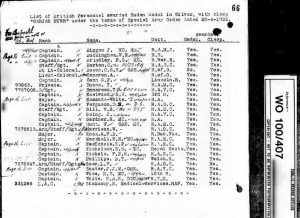 Notably, the rare Garjak Nuer clasp was issued for operations in 2 periods (13th to 16th May 1919 and between 16 January to 26th April 1920). The Garjak Nuer lived in the Eastern Nuer District of the Upper Nile.

The Garjak Nuer expedition was sent in 2 columns of which the Egyptian Artillery, to whom Gardner was attached, were in the Southern Column led by Bt. Lt Col C.R.K. Bacon so it is most likely that Gardner was in the Southern Column. Of note, it is reported in the very fine work On Patrol, The Story of the Khedive’s Sudan Medal 1910-22 and its Recipients, by Brian Hewitt –  that Gardner was also  Mentioned-in-Despatches for valuable service in the Garjak Nuer expedition. 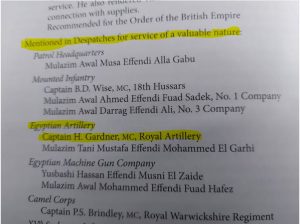 Authority to wear the Order of the Nile was announced in the London Gazette 9th May 1922. He was named in the King’s Royal Licence along with 3 other officers. 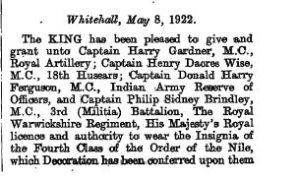 Harry Gardner MC (12 June 1890 – 12 February 1939) was born at the City of London and educated at The King’s School, Canterbury. From there he attended the Royal Military Academy, Woolwich, graduating in July 1910 as a second lieutenant in the Royal Artillery. He was promoted to the rank of lieutenant in July 1913.
He served in the First World War, entering France 16th August 1914, during which he was promoted to the temporary rank of Captain in July 1915. He relinquished a temporary appointment to Brigade Major–Captain in March 1919. 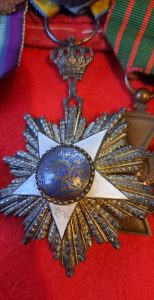 In June of the same year, he was awarded the Military Cross and decorated with the Croix de Guerre by France. He was granted the Order of the Nile (fourth class) in May 1922, for operations against the Nuer leader Garluark in the Upper Nile along with the Khedive’s Sudan Medal 1910 with the rare Garjak Nuer clasp. Having been seconded to the Royal Military College of Science, Gardner was restored to the Royal Artillery in April 1928. He was promoted to the rank of major in December 1928. He retired from active service in March 1931.

As a sportsman Gardner made two appearances in first-class cricket for the British Army cricket team in June 1914, against Cambridge University at Fenner’s and the Royal Navy at Lord’s. He scored 42 runs in his two first-class matches, with a high score of 17.

Harry Gardner died at East Grinstead in February 1939.
This possibly unique, swing mounted group is brought fresh to the market and is all on original ribbon having not seen the light of day for decades. It comes with the miniatures which has the pendant of the Order of the Nile missing.

Payment preferred by Bank Transfer (Sort Code 30-94-41. Acct No. 48469068 IBAN & BIC details on request). Payment by Card or Cheque is also accepted. Payment by PayPal – NOT ACCEPTED and will be returned if attempted.