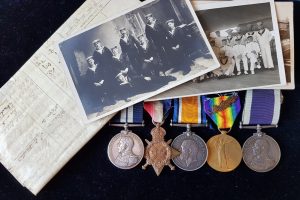 Together with Original Service Parchment, 2 photographs and the book – Sir Ian Hamilton’s Despatches from the Dardanelles, in which the recipient is mentioned. D.S.M. is named to – 193834 W. MORGAN. P. O. H. M. S. PRINCE OF WALES. 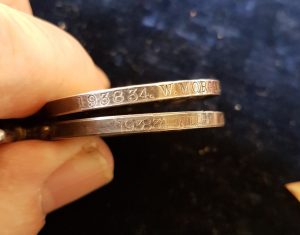 The Distinguished Service Medal is announced in the London Gazette 16th August 1915 page 8132. His MID is in the same Gazette and amongst a list headed Petty Officers and Med: Special Recommendations page 8131. His MID and DSM are both confirmed on his service papers.

In the book Sir Ian Hamilton’s Despatches from the Dardanelles the Special Recommendation MID is mentioned in the section of Vice-Admiral de Roebuck’s Despatch (page 112).  2 of the photographs are of crew of HMS Egmont on which he served pre-WW1. William Morgan was born 19th September 1880 at Newtownards, County Down and gave his address, on joining, Castle Street, Bangor, Co. Down. His address later is changed to 98 Napier Road, Southsea, Portsmouth. His papers confirm the DSM, MID, Long Service and Good Conduct Medal and the Great War trio.