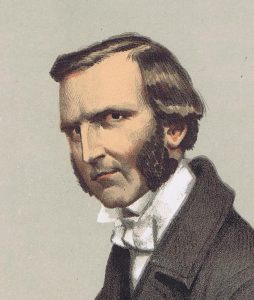 Temple was born in Santa Maura, one of the Ionian Islands, the son of Major Octavius Temple, who was subsequently appointed lieutenant-governor of Sierra Leone. On his retirement, Major Temple settled in Devon and contemplated a farming life for his son Frederick, giving him a practical training to that end. Temple’s grandfather was William Johnson Temple, Rector of Mamhead in Devon, who is mentioned several times in James Boswell’s Life of Johnson. Temple was sent to Blundell’s School, Tiverton, and soon showed signs of being suited to a different career. He retained a warm affection for the school, where he did well both academically and at physical activities, especially walking. The family was not wealthy, and Temple knew he would have to earn his own living. He took the first step by winning a Blundell scholarship at Balliol College, Oxford,[4] before he was seventeen. The Tractarian Movement had begun five years earlier, but the memorable Tract 90 had not yet been written. In the intellectual and religious excitement, he drew closer to the camp of “the Oxford Liberal Movement.” In 1842 he took a double first and was elected fellow of Balliol, and lecturer in mathematics and logic. Four years later he was ordained, and, with the aim of improving the education of the very poor, he accepted the headship of Kneller Hall, a college founded by the government for the training of masters of workhouses and penal schools. The experiment was not successful, and Temple himself advised its abandonment in 1855. He then accepted a school-inspectorship, which he held until he went to teach at Rugby School in 1858. In the meantime he had attracted the admiration of Prince Albert of Saxe-Coburg-Gotha, and in 1856 he was appointed Chaplain-in-Ordinary to Queen Victoria. In 1857 he was select preacher at his university

Original Lithograph of The Bishop Designate of Exeter with the caption at the bottom of the print: He Has Displayed Ability in the free handling of religious subjects and has nevertheless been made a Bishop