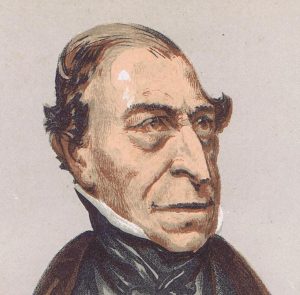 Frederic Thesiger, 1st Baron Chelmsford, PC, QC, FRS (25 April 1794 – 5 October 1878) was a British jurist and Conservative politician. He was twice Lord Chancellor of Great Britain. Born in London, Thesiger was the third son of Charles Thesiger, collector of customs at St Vincent, West Indies, by his wife Mary Anne, daughter of Theophilus Williams. His paternal grandfather, John Andrew Thesiger, was born in Saxony but migrated to England and became secretary to Lord Rockingham. Thesiger’s uncle Sir Frederic Thesiger was naval Aide-de-Camp to Lord Nelson at the Battle of Copenhagen in 1801.Thesiger was originally destined for a naval career, and he served as a midshipman on HMS Cambrian in 1807 at the second bombardment of Copenhagen. His only surviving brother died about this time, however, and he became entitled to succeed to a valuable estate in the West Indies. It was decided that he should leave the navy and study law with a view to practising in the West Indies and eventually managing his property in person. He proceeded to enter at Gray’s Inn in 1813, and was called on 18 November 1818. He joined the home circuit, and soon got into good practice at the Surrey sessions, while he also made a fortunate purchase in buying the right to appear in the old palace court (see Lord Steward). Another change of fortune, however, awaited him, for a volcano destroyed the family estate, and he was thrown back upon his prospect of a legal practice in the West Indies.

In 1824, he distinguished himself by his defence of Joseph Hunt when on his trial at Hertford with John Thurtell for the murder of William Weare; and eight years later at Chelmsford assizes he won a hard-fought action in an ejectment case after three trials, to which he attributed so much of his subsequent success that when he was raised to the peerage he elected to be created Baron Chelmsford, of Chelmsford in the County of Essex. In 1834, he was made King’s Counsel, and in 1835 was briefed in the Dublin election inquiry which unseated Daniel O’Connell. In 1840, he was elected M.P. for Woodstock. In 1844, he became Solicitor General, but having ceased to enjoy the favor of the Duke of Marlborough, lost his seat for Woodstock and had to find another at Abingdon. In 1845, he became Attorney-General, holding the post until the fall of the Peel government on 3 July 1846. Thus by three days Thesiger missed being chief justice of the common pleas, for on 6 July Sir Nicholas Tindal died, and the seat on the bench, which would have been Thesiger’s as of right, fell to the Liberal attorney-general, Sir Thomas Wilde.

Original Lithograph with the caption at the bottom of the print: It is hardly to be believed that two political leaders should fall out only because their wives cannot agree.