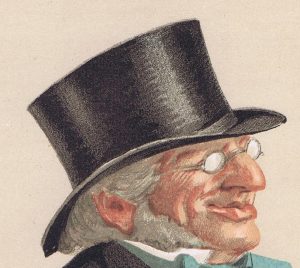 Original Lithograph with the caption at the bottom of the print: Barrister & Baronet

Goldsmid was called to the bar at Lincoln’s Inn in 1833, becoming the first Jew to become an English barrister, and was made Queen’s Counsel in 1858. In 1859 he succeeded to his father’s honors. After the passing of the Jewish Disabilities Bill, in which he had aided his father with a number of pamphlets that attracted great attention, he entered Parliament in 1860 as member for the Reading constituency, and represented that constituency until his death. Goldsmid was strenuous on behalf of the Jewish religion, and the founder of the great Jews Free School. He was a munificent contributor to charities and especially to the endowment of University College London. He married Louisa Goldsmid who was his cousin. His wife was a campaigner for women’s education. He employed the author and translator Frederica Maclean Rowan as his secretary for some years