Founder of the Cremation Society of Great Britain Print

Founder of the Cremation Society of Great Britain 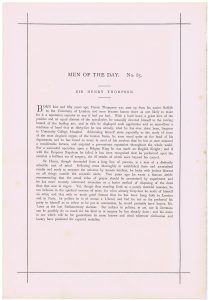 Founder of the Cremation Society of Great Britain

Founder of the Cremation Society of Great Britain Print

Thompson was born at Framlingham, Suffolk. In 1853 he was appointed assistant surgeon at University College Hospital, becoming full surgeon in 1863, professor of clinical surgery in 1866, and consulting surgeon in 1874. In 1884 he became professor of surgery and pathology in the Royal College of Surgeons. Specializing in surgery of the genito-urinary tract, and in particular in that of the bladder, he studied in Paris under Jean Civiale, who in the first quarter of the 19th century had developed a procedure to crush a stone within the human bladder and who had invented an instrument for this minimally invasive surgery.

In 1863, when King Leopold I of Belgium was suffering from kidney stones, Thompson was called to Brussels to consult in the case, and after some difficulties was allowed to perform the operation of lithotripsy. It was successful, and in recognition of his skill Thompson was appointed surgeon-extraordinary to the King, an appointment which was continued by Léopold II. Nearly ten years later Thompson carried out a similar operation on the former Emperor Napoléon III; however, the Emperor died four days after, not from the surgical procedure, as was proved by the post-mortem examination, but from uremia.

In 1874 Thompson helped in founding the Cremation Society of Great Britain, of which he was the first president; he also did much toward the removal of the legal restrictions on cremation. Woking Crematorium finally became the first of its kind in the UK. Thompson’s last public duty for the society, in 1903, was to open Birmingham Crematorium, the country’s ninth. He died in April 1904; his body was cremated at Golders Green Crematorium, the first in London, which he had opened in 1902.