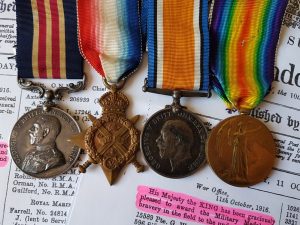 Alfred Green was also Mentioned in Despatches. The 2 awards were announced in the London Gazette as follows:

Sapper Alfred Green entered France 7th November 1914 and is entitled to the Rose Emblem as well as the Oakleaf Emblem (MID).