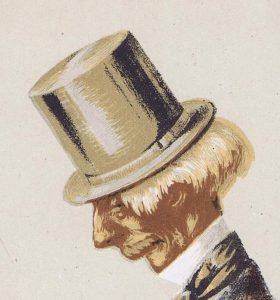 Field Marshal Hugh Henry Rose, 1st Baron Strathnairn, GCB, GCSI, PC (6 April 1801 – 16 October 1885) was a senior British Army officer. He served as a military adviser to the Ottoman Army who were seeking to secure the expulsion of the forces of Mehemet Ali from Syria during the Egyptian–Ottoman War. He then fought with the French Army at the Battle of Alma, the Battle of Inkerman and at the Battle of Mamelon during the Crimean War. During the Indian Rebellion of 1857 Rose was given command of the Central Indian Field Force and secured the defeat of the Indian rebels at Jhansi in April 1858, at Lahore in May 1858 and at Gwalior in June 1858. He went on to be Commander of the Bombay Army, Commander-in-Chief, India and then Commander-in-Chief, Ireland.

Original Lithograph of Lord Strathnairn with the caption at the bottom of the print: He Was Made A Statesman because he was a Soldier