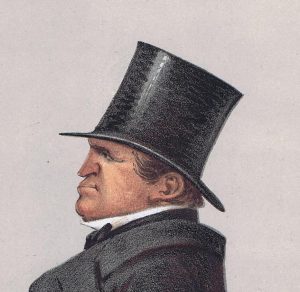 A statesman whose father served as Conservative Prime Minister of the United Kingdom. Although Stanley was more liberal than his father, he was elected a Tory MP in 1848. He remained in the Conservative Party until 1880 when he changed his allegiance and joined the Liberal Party. In his father’s second administration he held the office of Secretary of State for the Colonies before becoming President of the Board of Control. He was responsible for the India Bill of 1858 in the House of Commons, and was appointed the first Secretary of State for India. The publication of his diaries after nearly a century furnished historians with one of the richest sources for his age.

Original Lithograph of Lord Stanley with the caption at the bottom of the print: He Speaks With One Party and acts with the other.