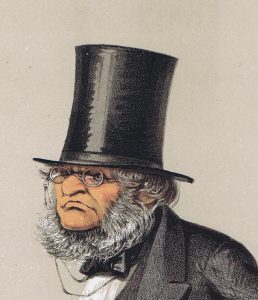 Edward George Geoffrey Smith-Stanley, 14th Earl of Derby, KG, GCMG, PC (29 March 1799 – 23 October 1869) was a British statesman, three-time Prime Minister of the United Kingdom and, to date, the longest-serving leader of the Conservative Party. He was known before 1834 as Edward Stanley, and from 1834 to 1851 as Lord Stanley. He is one of only four British prime ministers to have three or more separate periods in office. However, his ministries all lasted less than two years, and totalled three years and 280 days. Derby educated the party and acted as its strategist to pass the last great Whig measure, the 1867 Reform Act. It was his greatest achievement to create the modern Conservative Party in the framework of the Whig constitution, though it was Disraeli who laid claim to it

Original Lithograph of The Earl of Derby with the caption at the bottom of the print: It Is His Mission To stem the tide of democracy