President of the Chemical Society 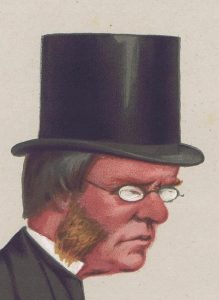 Original Lithograph of Doctor Lyon C. V. Playfair with the caption at the bottom of the print: Chemistry

Playfair became manager of a calico works in Primrose, near Clitheroe, and in 1843 was appointed Professor of Chemistry at the Royal Manchester Institution, where he was assisted by Robert Angus Smith. Two years later, he was made chemist to the Geological Survey, and subsequently became Professor in the new School of Mines. In 1848, he was elected to the Royal Society, and three years later was made Special Commissioner and a member of the executive committee of the Great Exhibition.

Appointed a Companion of the Order of the Bath that same year, Playfair also became Gentleman Usher to Prince Albert, and in 1853 was appointed Secretary of the Department of Science, in which capacity he advocated the use of poison gas against the Russians in the Crimean War. In 1855, he was a commissioner of the Exposition Universelle, and two years later became President of the Chemical Society, finally returning to Edinburgh University in 1858 as Professor of Chemistry there. In 1859 he was elected a Fellow of the Royal Society of Edinburgh, his proposer being James David Forbes. He served as the Society’s Vice President from 1864 to 1870