An 18 year old Edwin Newport, born in Compton Pauncefoot, Dorset, was a farm labourer when he attested into the Dorset Regiment at Sherborne in 1888. He served a total of 13 years. He served in Egypt (mounted infantry) and India before his posting to South Africa.

He was wounded, gun shot wound to the chest on the 11th June 1900 at Almond’s Nek otherwise known as Alleman’s Nek, the decisive engagement. Newport was one of 62 casualties of the Dorsets. 9 were killed in action, 2 died of wounds and Newport was one of the 51 wounded. Medal roll confirms the medal and clasps and also confirms that he was invalided home. 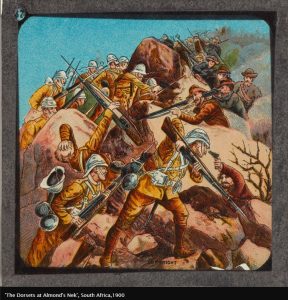 Conan Doyle described it succinctly: “General Buller had spent the latter half of May in making his way from Ladysmith to Laing’s Nek, and the beginning of June found him with twenty thousand men in front of that difficult position. Some talk of a surrender had arisen, and Christian Botha, who commanded the Boers, succeeded in gaining several days’ armistice, which ended in nothing. The Transvaal forces at this point were not more than a few thousand in number, but their position was so formidable that it was a serious task to turn them out. Van Wyk’s Hill, however, had been left unguarded, and as its possession would give the British the command of Botha’s Pass, its unopposed capture by the South African Light Horse was an event of great importance. With guns upon this eminence the infantry were able, on June 8th, to attack and to carry with little loss the rest of the high ground, and so to get the Pass into their complete possession. Botha fired the grass behind him, and withdrew sullenly to the north. On the 9th and 10th the convoys were passed over the Pass, and on the 11th the main body of the army followed them.

The operations were now being conducted in that extremely acute angle of Natal which runs up between the Transvaal and the Orange Free State. In crossing Botha’s Pass the army had really entered what was now the Orange River Colony. But it was only for a very short time, as the object of the movement was to turn the Laing’s Nek position, and then come back into the Transvaal through Alleman’s Pass. The gallant South African Light Horse led the way, and fought hard at one point to clear a path for the army, losing six killed and eight wounded in a sharp skirmish. On the morning of the 12th the flanking movement was far advanced, and it only remained for the army to force Alleman’s Nek, which would place it to the rear of Laing’s Nek, and close to the Transvaal town of Volksrust.

Had the Boers been the men of Colenso and of Spion Kop, this storming of Alleman’s Nek would have been a bloody business. The position was strong, the cover was slight, and there was no way round. But the infantry came on with the old dash without the old stubborn resolution being opposed to them. The guns prepared the way, and then the Dorsets, the Dublins, the Middlesex, the Queen’s, and the East Surrey did the rest. The door was open and the Transvaal lay before us. The next day Volksrust was in our hands.”