This is the unusual and intriguing medal to the Secretary to General Valentine Baker Pasha, Egyptian Gendarmerie of Police (Suakin Field Force).

French born, Henry Cantel, known as Cantel Bey (esq) served, and is confirmed on the medal roll of the Egyptian Gendarmerie of Police (Suakin Field Force)  as Secretary to General Baker. 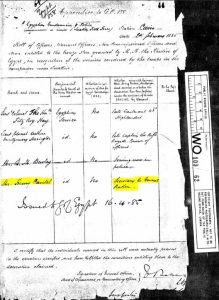 Henry Cantel found international notoriety later in his career when as a member of the State Domaines Administration he obtained the original stereos used for the 1897 overprints for Sudanese Postage Stamps. He over-stamped the then current Egyptian stamps, which were on chalk surfaced paper thus overprinting stamps not genuine to the period. They became known as The 1902 Forgeries in philatelic circles – (ref – Sudan: the stamps and postal stationary of 1867 to 1970 by Major Stagg, E.C.W. Published by Harry Hayes, Batley, 1977)

A set of these stamps are sold with this medal

footnote – General Valentine Baker Pasha – Baker was educated in Gloucester and in Ceylon, and in 1848 entered the Ceylon Rifles as an ensign. He soon transferred to the 12th Lancers, and saw active service with that regiment in the 8th Cape Frontier War of 1852–1853. In the Crimean War, Baker was present at the Battle of Chernaya River and at the fall of Sevastopol, and in 1859 he became major in the 10th Hussars, succeeding only a year later to the command. This position he held for 13 years, during which period the highest efficiency of his men was reached, and outside the regiment he did good service to his arm by his writings. He went through the wars of 1866 and 1870 as a spectator with the German armies, and in 1873 he started upon a famous journey through Khorasan with his friend Fred Burnaby. Although he was unable to reach the Khanate of Khiva the results of the journey afforded a great deal of political, geographical and military information, especially as to the advance of Russia in Central Asia. In 1874, he was back in England and took up a staff appointment at Aldershot.

Less than a year later, Baker’s career in the British army was ended by a scandal. He was arrested on a charge of indecent assault upon a young woman in a railway carriage. The woman, Rebecca Kate Dickinson, ended up clinging to the outside of the carriage to escape him. The matter went to trial and there was much public interest. Baker offered no defence, and was sentenced to a year’s imprisonment and a fine. He was then dismissed from the service. The case led to the introduction of train corridor coaches; previously train compartments only had doors to the outside. 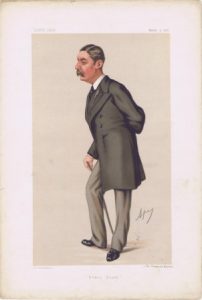 Two years later, having left England, he entered the service of the Ottoman Army in the war with Russia. At first in a high position in the Ottoman Gendarmerie he was soon transferred to Mehmed Ali Pasha’s staff, and thence took command of a division of infantry. With this division, Baker sustained the rearguard action of Tashkessen against the troops of Gourko. Promoted Ferik (lieutenant-general) for this feat, he continued to command Suleiman’s rearguard. After the peace he was employed in an administrative post in Armenia, where he remained until 1882. In this year he was offered the command of the newly formed Egyptian Army, which he accepted. On his arrival at Cairo, however, the offer was withdrawn and he only obtained command of the Egyptian police. In this post he devoted by far the greater amount of his energy to the training of the gendarmerie, which he realised would be the reserve of the purely military forces.

When the war in Sudan broke out, Baker, hastening with 3500 men to relieve Tokar, encountered the enemy under Osman Digna at El Teb. His men becoming panic-stricken at the first rush were slaughtered. Baker himself with a few of his officers succeeded by hard fighting in cutting a way out, but his force was annihilated. British troops soon afterwards arrived at Suakin, and Sir Gerald Graham took the offensive. Baker Pasha accompanied the British force, guiding it on its march to the scene of his defeat, and at the desperately fought second battle of El Teb he was wounded. (ackn – wikipedia)