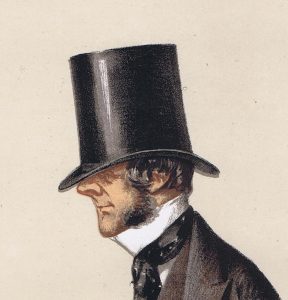 Born Chichester Fortescue, Carlingford was the son of Chichester Fortescue (died 1826), Member of Parliament for Hillsborough in the Irish parliament. He came of an old Anglo-Irish family settled in Ireland since the days of Sir Faithful Fortescue (1581–1666), whose uncle, The 1st Baron Chichester, was Lord Deputy. The history of the family was written by his elder brother, Thomas Fortescue, who in 1852 was created Baron Clermont. His mother was Martha Angel, daughter of Samuel Meade Hobson. Carlingford was educated at Christ Church, Oxford, where he took a first in Classics (1844) and won the chancellor’s English essay (1846). In 1863, he assumed by Royal Licence the additional surname of Parkinson as heir to his aunt’s husband William Parkinson Ruxton.

Irish Privy Council,  Knight of the Order of St Patrick,  Member of Parliament for Hillsborough

Original Lithograph with the caption at the bottom of the print: He Married Lady Waldegrave and governed Ireland