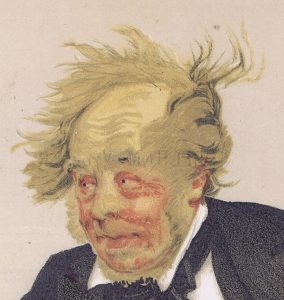 Original Lithograph with the caption at the bottom of the print: He Advocated Free Trade before it was safe to attack Protection

Charles Pelham Villiers (3 January 1802 – 16 January 1898) was a British lawyer and politician from the aristocratic Villiers family who sat in the House of Commons from 1835 to 1898, making him the longest-serving Member of Parliament (MP). Pelham Villiers also holds the distinction of the oldest candidate to win a parliamentary seat, at the age of 93. He was a radical reformer who often collaborated with John Bright. He is best known for leadership of the Anti-Corn Law League, until repeal in 1846. Lord Palmerston appointed him to the cabinet as president of the Poor-law board in 1859. He worked for numerous reforms, most notably the Metropolitan Poor Law Act of 1867. Florence Nightingale helped him formulate the reform of nursing within the poor law. His Public Works (Manufacturing Districts) Act of 1863 opened job-creating schemes in public health projects. His political importance was overshadowed by his brother the earl of Clarendon, and undercut by the hostility of W.E. Gladstone (wikipedia)