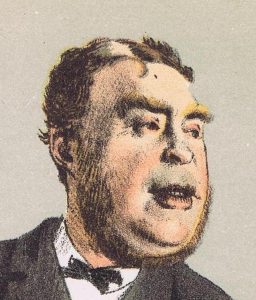 Original Lithograph with the caption at the bottom of the print: Little Ben

George Augustus Frederick Cavendish-Bentinck PC JP (9 July 1821 – 9 April 1891), known as George Bentinck and scored in cricket as GAFC Bentinck, was a British barrister, Conservative politician, and cricketer. A member of parliament from 1859 to 1891, he served under Benjamin Disraeli as Parliamentary Secretary to the Board of Trade from 1874 to 1875 and as Judge Advocate General from 1875 to 1880.

In cricket, he was batsman of unknown handedness, and played nine first-class games for the Marylebone Cricket Club between 1840 and 1846, as well as appearing once for the Cambridge University cricket team and again for a first-class Invitational XI match.