captured and held as a POW also entitled to the Cape of Good Hope Medal with Bechuanaland clasp. 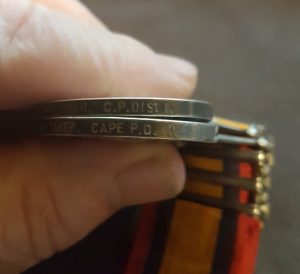 This medal pair consists of as follows:

930 Pte. M Whitaker served with the Cape Police District 1 is also entitled to the Cape of Good Hope Medal with Bechuanaland clasp.

He was captured and held as a POW and later released on 6 June 1900 at Waterval.

Gazetteer [2528: 2535-2814] a farm which gave its name to a railway station on the Pretoria-Pietersburg railway line in the South African Republic (Wonderboom district; Gauteng), 20 km north of central Pretoria. Variants: Waterfall North (the name of a post office established in 1902 at the station); Pyramid (name of station and post office changed 1 June 1905). British prisoners in the camp on the farm numbering some 3,000 were released on 6 June 1900 by a squadron of the 2nd Dragoons (Royal Scots Greys) commanded by Capt F.S. Maude. The station became a base for British columns operating in the district.