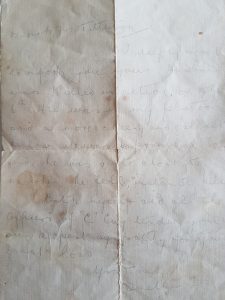 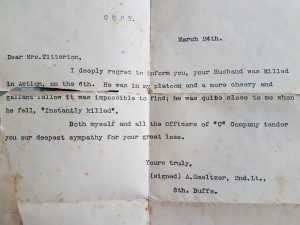 This collection of family medals comes from the last surviving descendant of the 3 Soldiers whose medals and papers are brought to market, for the first time, here.

With these medals are some original papers. There is his Soldiers’ Small Book

and a handwritten letter from his Platoon Commander, Lieutenant A Smeltzer, which has been transcribed on to a typed copy which is in poor condition with tears, and it reads “March 24th. Dear Mrs Titterton. I deeply regret to inform you, your husband was Killed in Action on the 6th. He was in my platoon and a more cheery and gallant fellow it was impossible to find; he was quite close to me when he fell “”Instantly Killed””. Both myself and all the Officers of C Company tender you our deepest sympathy for your great loss. Yours truly, A Smeltzer, 2nd Lt. 6th Buffs.”

The letter from the Records Office which is to confirm the 14/15 Star is also with this group. There are 3 silk postcards, one of which has written on the reverse “from Dad to Albert wishing you a Merry Christmas”. As can be seen below, Joseph had a son Albert.

There is also an original RFC cap badge.

There is also a Ticket to the 19th July 1919 Peace Celebration which admitted “the bearer to the reserved space in the Mall for the widows of sailors and soldiers.”

The only surviving member of the family also provided the World War Two medal group which had, she believed belonged to Albert, Joseph’s Son. This group ia an 8th Army group consisting of a bar with 39/45 Stra, Africa Star and Italy Star. The attached ribbon bar has the 8 sewn on to the Africa ribbon.

Joseph was a Londoner who was born in Southwark, was living in Bermondsey, and enlisted at Finsbury [Park], Middlesex. Pages from his service record survive at the National Archives, and the following information is taken from these.

When he joined The Buffs Special Reserve at Finsbury Barracks on the 15th October 1914, Joseph Titterton was 40 years old and working as a labourer. He was five feet, five and a half inches tall and was also an old soldier, having served six years with the Duke of Cornwall’s Light Infantry and been discharged in 1899. The number scrawled on the front of his attestation paper is SR/EK/GS/766: Special Reserve / East Kent / General Service; the number falls into a special series for men who joined the Special Reserve during war-time.

Joseph Titterton has no known grave and is commemorated on the Loos Memorial.