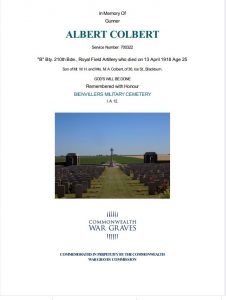 Emotive pair of Great War medal groups to 2 brothers from 36 Ice Street, Blackburn – Albert who was killed in action and James COLBERT. 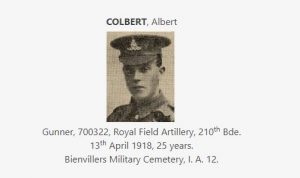 Also present is a printed article of the Blackburn Times 11th May 1918 which announces the death of Albert along with a photograph of the deceased.

It is of note that a handwritten note states that Albert died when due to return home. It records that the was playing cards in a shell hole when a shell exploded in the hole and heavily damaged his head and that he died in the arms of his brother. This is unsubstantiated but worthy of further research. This note also makes reference to a 3rd brother Bob (Robert) who was gassed. A Robert Colbert ( Gunner 198814 Royal Artillery) was discharged with Silver War Badge in 1919 (roll image attached). The 1901 Census records the Colbert Household in which were sons James 16yrs, Robert 14yrs and Albert 8yrs amongst other children (see image).