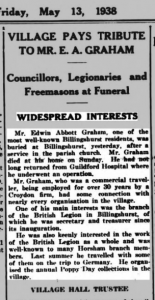 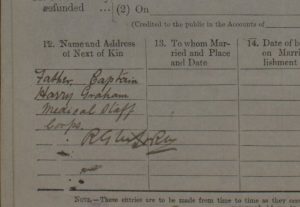 He was the son of Captain Harry Graham, Medical Staff Corps. Edwin joined 29th Field Battery, Royal Artillery as Trumpeter. His papers reveal that on the 6th January 1893, at Clonmel, he deserted.

Edwin Abbott Graham of Billingshurst, West Sussex. He was born in Colchester, Essex, circa 1878 and by the 1911 Census he had married, in 1906, Lilian Mabel Merrikin of Louth, Lincolnshire and was living in Croydon, Surrey. He died 1938. At the time of his death, 8th May 1938, he lived at 2 Rose Villas, Billingshurst. He left his widow Lilian Mabel Graham. He is recorded as being a commercial traveller working for a Croydon based business.

BILLINGSHURST FREEMASON – He was a most well-known Billingshurst resident. His obituary notes that he had some connection with almost every organisation in the village. He was Secretary and Treasurer of Billingshurst British Legion and had been since its inauguration. He was a Trustee of the Village Hall, Committee Member of the Working Men’s Club and Treasurer of the Horticultural Society. He was a Freemason and belonged to the Pentalpha Lodge (No. 3164), Pulborough, West Sussex and was Assistant Master of Ceremonies 1966.

With this group are the medals and ribbon bar that were awarded to George Valentine Merrikin, born 1917 died 1966. Note that Edwin Abbott Graham married Lilian Merrikin. There were numerous Merrikin family members that attended his funeral.